Neil Finn is a singer and songwriter and one of New Zealand's foremost musicians. In 1977 Neil was invited to London to join Split Enz, the band formed by his elder brother, Tim Finn. Split Enz broke up in 1984 and Neil formed a new band, Crowded House, with several other Australian and New Zealand musicians. Crowded House had a string of hits over the next 10 years, releasing 4 albums and culminating in a concert in the forecourt of the Sydney Opera House. Finn went solo after this, releasing several albums as well as two albums with his brother Tim (Finn Brothers).

Sarah McLachlan (born Sarah Ann McLachlan January 28, 1968 in Halifax, Nova Scotia, Canada) is a Grammy-winning musician, singer and songwriter. She is known for the emotional sound of her ballads. Some of her most popular songs include "Angel", "Building a Mystery", "Adia", "Possession", "Fallen", "I Will Remember You", and "World on Fire". Her best-selling album to date is Surfacing, for which she won two Grammy Awards and four Juno Awards.

Passion Pit is an electronic band which formed in Cambridge, Massachusetts, United States in 2007. They consist of Michael Angelakos (vocals, keyboards), Ian Hultquist (keyboards, guitar), Ayad Al Adhamy (synth, samples), Jeff Apruzzese (bass, keyboard) and Nate Donmoyer (drums). "Passion Pit" was a vocabulary word used in a class Mike took in school. It's a slang word for a drive-in movie theatre where kids used to go to make out.

1: Sami or some people know him as boyswithadream, he's a youtube singer. He cover several popular song such as: The One That Got Away (Katty Perry), Love You Like A Love Song (Selena Gomez), Mistletoe (Justin Bieber) 2: Sami is Sami Liuski. A composer/producer from Finland. Otherwise known as Bangkok Impact, 8bit Rockers, Keyo Laboratories, Kleep, Lolita Sträp, Olavi, Omni Incentive & The Red Loafen. He is also in the group Putsch '79. 3: Polish band Sami, known from the song "Lato 2000".

David A. Stewart is most renown as a member of the succesfull 80's pop duo Eurythmics, together with Annie Lennox. The duo split in the early 1990s and reunited for one album, Peace, and subsequent tour in 1999, as well as for two bonus tracks for the greatest hits compilation Ultimate Collection in 2005.
Even before the Eurythmics split, Stewart worked as a producer and writer with other artists; this work yielded the hit singles Don't Come Around Here No More by Tom Petty & The Heartbreakers and Lily Was Here by Dutch saxophonist Candy Dulfer. 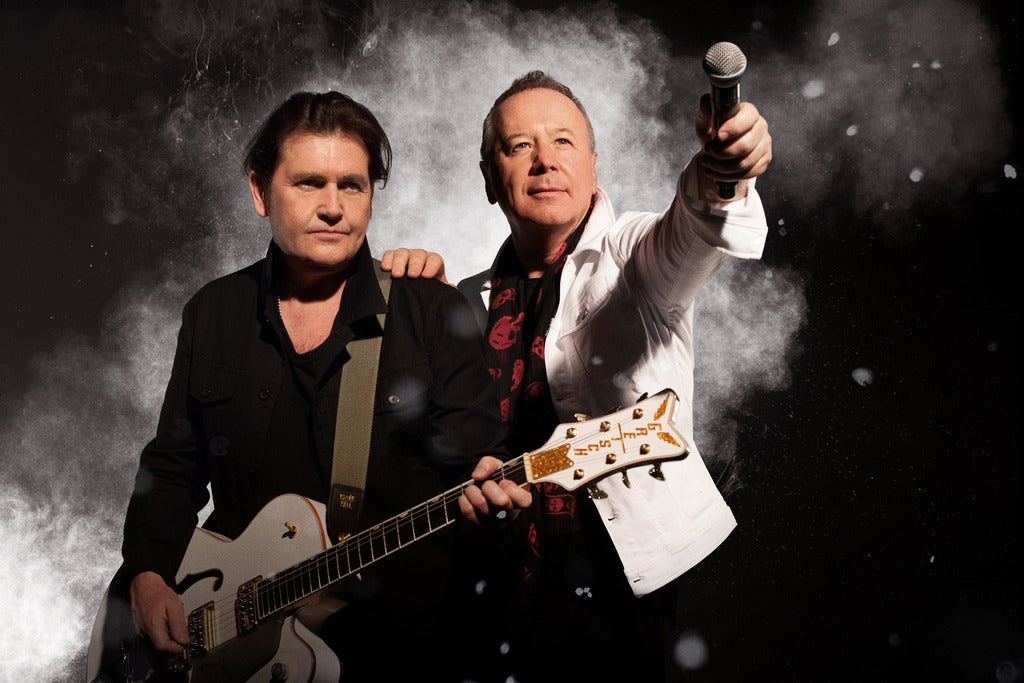 Simple Minds is a Scottish pop and rock band that achieved its greatest worldwide popularity from the mid-80s to the early 90s, still playing to a massive fan-following today. The group, from the South Side of Glasgow, has produced a set of critically acclaimed albums in the early 80s. It also has secured a string of successful hit singles, the best known being their #1 worldwide hit single "Don't You (Forget About Me)", from the soundtrack of the John Hughes movie The Breakfast Club and their worldwide hit single "Alive and Kicking". The band has sold more than 40 million albums since 1979, breaking to the U.K. Top 40 chart a full 24 times.

Founding members Jim Kerr (vocals) and Charlie Burchill (guitar, keyboards), along with drummer Mel Gaynor, are the core of the band. It also currently features Andy Gillespie on keyboards and Ged Grimes on bass guitar. Formed in late 1977 from the ashes of punk rock group Johnny & the Self Abusers (which had only created one single), Simple Minds initially signed to Arista, who recorded and released their first three albums. As the the Self-Abusers, they had had a very raw and unpolished sound, playing their first gig in a Glasgow bar on Easter Monday in 1977. â€œWhen we were onstage it was mayhem,â€ Kerr later said. â€œNo one could play a note. It was just white noise... took us about six months to become serious about it.â€

The musical changes Simple Minds went through in these first three albums shows how diverse their song range is. Tracks to compare would be "Chelsea Girl", their first single with hints of Johnny and the Self Abusers that was inspired by Andy Warhol's pop art, and "I Travel", an almost disco sounding track, with "Someone", a loose yet energetic rock track that could have fit alongside the power pop bands at the Top of the Pops. The group grew major influence from the glam rock and post-punk ethos around them, particularly from the band's hero David Bowie.

Virgin Records saw the potential in the band and in 1981 signed them up. The first Virgin Records release, Sons And Fascination/Sister Feelings Call, was a double album. Yet it was later released as two single albums: Sons and Fascination and Sister Feelings Call. Their fan-base in the U.K. grew, but they couldn't quite break into the mainstream yet. In September 1981, founding drummer Brian McGee left the band, to be replaced by Gaynor.

They first found notable success with New Gold Dream (81-82-83-84), which is still regarded as their best album by some fans. Moving into a more melodic rock sound, Billboard magazine later called the release "a creative peak", and the 1982 album gave Simple Minds a top three U.K. chart slot. Irish rock group U2 took major influence from the band, particularly the aforementioned album, and they became often compared as friendly rivals from about this point on.

Soon afterwards, the band garnered great commercial success in Europe and their native U.K. since then (in the 80s and early 90s they sold 30 million albums worldwide). In the United States, however, they had a hard time reaching the popular pop audience. They finally smashed into the States with "Don't You (Forget About Me)", a new wave gem that was used in the soundtrack to the John Hughes coming-of-age film The Breakfast Club and went to number one. Ironically it is one of few songs recorded by the band that they didn't write themselves. Producer and composer Keith Forsey was such a devoted fan of the band and so fixated on the notion of them recording his tune that he flew to London to persuade them to do so, with them acceding mostly based on their budding personal friendship with Foresey.

In 1985, the arena rock fueled album Once Upon a Time yielded a string of worldwide hit singles such as "Alive and Kicking", "Sanctify Yourself", and "Ghostdancing" All this ead to playing bigger arenas and supporting Amnesty International with donations from record sales. "Alive and Kicking" in particular became something of a signature song of the band, it reached No. 2 on the Billboard Hot 100 in the U.S. and garnered airplay all over Europe

Still, the pressures of touring and recording took their toll. Frontman Kerr later remarked, "Looking back now, at the end of the '80s, one of the things we didnâ€™t have was endless energy. That was 13 years of nonstop recording, writing, rehearsing, touring. The wheels were staring to come off". Though the popularity of the band waned, with personnel changes leading to fan division, they kept on with their arena-ready sound and managed sporadic chart success. Critical reviews also favored the band.

Jim Kerr and Charlie Burchill remain the core of the band to this day, with Andy Gillespie (keyboards), Mel Gaynor (drums) and Eddie Duffy (bass) supporting. Other members of the band are Michael MacNeil (keyboards), Derek Forbes (Bass), and John Giblin (Bass). They have maintained a strong fan-base world-wide, and their somewhat more recent album Black and White 050505 received critical acclaim on its release in September 2005, although it did not secure a release in the U.S.

The band embarked on a U.K.-wide arena tour towards the end of 2008 to celebrate 30 years as a band. This was considered a great success. Their latest studio album, Graffiti Soul, was released on 25 May 2009. With praise appearing in publications such as Mojo magazine and the All Music Guide, the release became something of a comeback album, with it reaching the top 40 album charts in several nations. Fans also acclaimed the work.

Group frontman Jim Kerr is notable outside of the music arena today for his opening of a Hotel Villa Angela in Taormina, Sicily and his public support for the Celtic FC football team. He also was famously married to rock star Chrissie Hynde of the Pretenders in 1984 (divorced 1992). They have one child, Yasmin Paris Kerr (1985). He was subsequently married to actress Patsy Kensit in 1992 (divorced, 1996) with whom he had a son, James Kerr (born, 1993).

Andy Bull is a 23 year old singer-songwriter hailing from Sydney, Australia who developed his love of music whilst growing up with his father who was a collector of keyboards on his travels, and had a keen interest in playing the piano. It wasn’t long until Andy himself developed this interest in the piano, and soon surpassed his father’s abilities. As a new artist on the music scene in Sydney, his unique and “retro” lyrical style caught the eye of producer Tony Buchen in 2004.

Songfacts reports that Nashville pop rock band Hot Chelle Rae began with a meeting between singer-songwriter Nash Overstreet and guitarist Ryan Follese in 2005. After several changes, they eventually finalised their line up as Follese (lead vocalist), Overstreet (lead guitarist) plus Ian Keaggy (bass) and Jamie Follese (drums) and named themselves after their first "dedicated" fan, Chelle Rae. They were signed to Jive Records in October 2008, and then began work on their first album, Lovesick Electric, which was released on October 23, 2009.

New Kids On The Block (later NKOTB) is a successful boy band of the late 1980s and early 1990s. Assembled in Boston, Massachusetts, U.S. in 1984 by producer Maurice Starr; the members consist of brothers Jordan Knight and Jonathan Knight, Joey McIntyre, Donnie Wahlberg and Danny Wood. The group went on to sell over 70 million albums worldwide, generated hundreds of million of dollars of concert revenues, and roughly paved the way for acts like Backstreet Boys and *NSYNC.