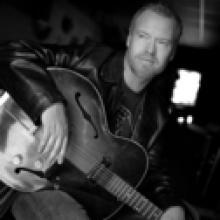 Shawn Mullins (born March 8, 1968 in Piedmont hospital, Atlanta, Georgia) is a singer songwriter who specializes in folk rock, Instrumental rock, and adult alternative music. Shawn's voice varies widely standing out along with his rythym acoustical, electric guitar strokes. Shawn travels with his sound man and tour manager, Big Kip Conner. Mullins's earlier work was influenced by acoustic and power-pop groups such as the Violent Femmes, The Producers and the Indigo Girls.