MICK THOMAS has been determined to reconfirm his standing as one of Australia's finest singer/songwriters - both solo and with his gun band THE SURE THING. Apart from the occasional one-off reformation show with the iconic WEDDINGS PARTIES ANYTHING, Mick has been busy with his own label, Croxton Records, and making the new MICK THOMAS AND THE SURE THING album. Produced by Mick with Craig Pilkington, PADDOCK BUDDY was recorded in the Northern Victorian Goldfields in May 2006.

James Blundell (born December 8, 1964) is an Australian country music singer. Blundell's first album, in 1989, was a self-titled effort, followed up by "Hand It Down", which was released in the United States in 1990 following its success in Australia.
Successive albums were This Road and Touch of Water. This Road included the hit "Way Out West", with James Reyne.
Since, Blundell has released several more albums, each meeting with more success than the last. 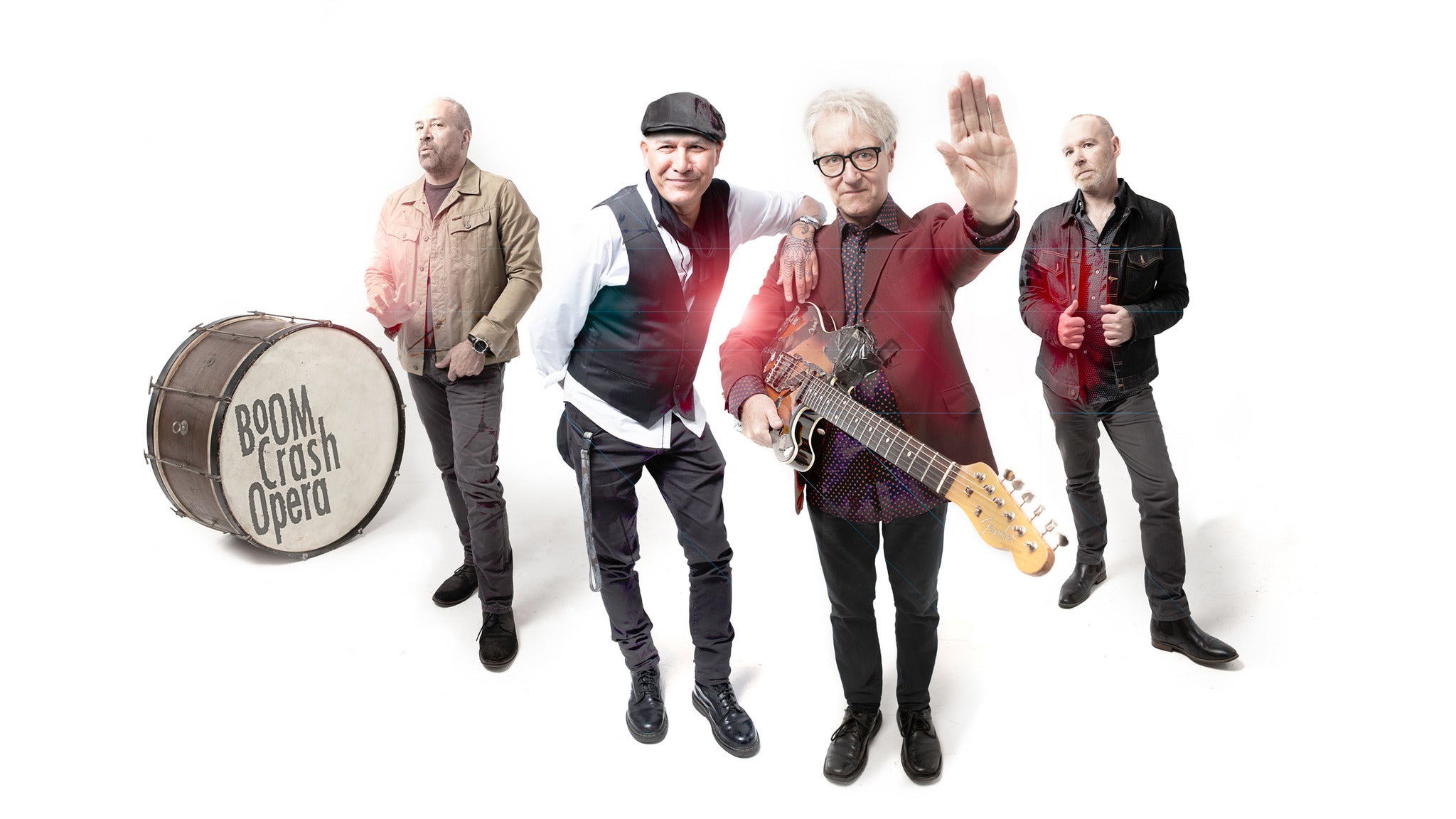 Boom Crash Opera where quickly signed to WEA records Australia and in 1986 released their debut single 'Great Wall'. The single reached number 5 on the ARIA National charts. Their self titled debut album, released in 1987, (Produced by Steve Brown and Alex Sadkin) went Gold and also featured the follow up singles 'Hands Up In The Air', 'City Flat' and 'Her Charity'.

Following on from the success of their debut in 1989 they released the top 10 single 'Onion Skin' from what would become their most successful album 'These Here Are Crazy Times' (Produced by Nick Launay and Richard Pleasance). 'These Here Are Crazy Times' spent more than 12 months in the Australian National Top 40 and achieved double platinum sales. 'Onion Skin' was followed by the top 20 singles 'Get Out Of The House', 'Best Thing', 'Dancing In The Storm' and 'Talk About It'.

In 1990 they released 'Look! Listen!!'. The album featured remixed versions of songs from their first two albums plus two new songs.
It was soon after the release of 'Look! Listen!!' that Richard Pleasance was diagnosed with Tinnitus. While Richard took time off he was replaced by Mick Vallance (Bass). It was during this break in 1991 that Richard released a solo album titled 'Galleon'. Featuring the singles 'Sarah (I Miss You)' and 'Don't Cry'. The album featured some of Richards closest friends in the industry including Paul Hester and Deborah Conway. Galleon was critically acclaimed and went on to earn Richard five nominations at the ARIA Awards. Richard then toured the album with Elvis Costello. Also at this time Richard co-produced and performed on the highly successful debut album for Deborah Conway 'String Of Pearls'. Richard also co-wrote a song on the album with Deborah called 'King Of Jordan'.

In 1991 they released the EP 'Dreams On Fire' with both Richard and Mick. The EP featured the single 'Holy Water'. Though the EP didn't perform as well as their previous efforts it brought the band and Keith Forsey together. This relationship would continue when Keith would end up co-producing their next album.

In 1992 they travelled to Los Angeles and began work on the follow up to 'These Here Are Crazy Times'. Soon after they began writing and recording Richard made the decision to leave the band. Richard was replaced by Dorian West (Bass).

The band returned from L.A. and Ian Tilley (Bass) joined as the permanent replacement for Richard. In 1993 they released the single 'Bettadaze'. It was followed by their third album, the L.A. recorded 'Fabulous Beast' (Produced by Don Gehman and Keith Forsey). 'Bettadaze' was followed by the singles 'In The Morning' and 'This Isn't Love'. Though the album went Top 40 it didn't perform as well as 'These Here Are Crazy Times' and soon dropped down the charts.

After the long and fairly successful tour of 'Fabulous Beast' they took a break. It was during this time off that Peter Farnan produced the debut album for[ 'The Sharp'][1](official website), a three piece band from Collingwood in Melbourne that went on to have some success. It was also during this break that Greg 'Spock' O'Conner (Keys/Guitar) left the band.

The remaining members returned to the airwaves and record stores in 1995 with a new contract with BMG and the double album 'Born' (Produced by Peter Farnan and Neil Wiles). The album was released as a double CD package. The idea being that after a few months they would release the second CD , 'Born Again'. 'Born' marked a real turn in the sound and look of the band. Featuring the Gary Glitter sounding single 'Gimme' and the follow up single 'Tongue Tied' The album was a lot more electronic than previous releases and though 'Gimme' received generous radio airplay the album failed to ignite renewed interest in the band. Due to this lack of interest BMG scrapped the release of the second part of the album 'Born Again'. Also in 1995 Richard released the follow-up to his debut album 'Colourblind'.

In 1996 Richard teamed up with singer/songwriter Wendy Morrison. They called themselves 'Felt' and released a self titled album on Gotham/BMG records.

1997 saw the release of Boom Crash Opera's last new release 'Gizmo Mantra' (Produced by Daniel Denholm, Kalju Tonuma and Boom Crash Opera). Pulling back from the electronic sounding 'Born', 'Gizmo' was somewhat of a return to the melodic rock sounds that fans where use to. Featuring the singles 'All' and a song penned by Peter and Richard around the time of 'Dreams On Fire' called 'Dreaming Up A Fire' the album again failed to return the band to the top of the charts.

A year later BMG released 'The Best Things' a greatest hits album featuring singles from all their albums plus the song 'Soundtrack' from their unreleased album 'Born Again'.

In 2002 Robert Doyle the Opposition Leader of Victoria used the song Dancing in the Storm as his theme song at the Liberal Party of Australia State election campaign launch in November. The Band wasn't asked their permission, and would have refused if asked according to Richard Pleasance. The campaign failed, and Steve Bracks of the Australian Labor Party won the election.

Various members have had success outside of the band. Peter Farnan has produced and written with up and coming bands such as Rachael Kane and Code. Greg 'Spock' O'Conner, who designed the majority of the bands cover art, now uses his Graphic Design skills to come up with record and book covers for other artists including a photo book he is currently working on for Peter Green (PR Manager for Neil Finn).

Without doubt it is Richard Pleasance who has had the most success outside of the band. As well as producing and co-writing with Deborah Conway, Richard has also produced, arranged, played and written with acts such as Archie Roach, Paul Kelly, Suzanne Vega, James Reyne, Jon Stevens, Nick Barker, Seven Stories and Augie March. One of his biggest successes came when he wrote and produced the theme from the popular Australian television series 'SeaChange'.

In addition to his work as a record producer and score composer, Richard has composed music for a variety of documentary series and television commercials. And he has just released a new album with his new band Pleasantville. The band includes his wife, Michelle, and they recently released their debut album 'Hill of Beans' (2004).

Boom Crash Opera are still together. Though they haven't released anything since 'Gizmo Mantra' they still play the odd show. Greg and Richard have also rejoined their old band mates at some of these shows.

From the sleepy beachside town of Umina, NSW - Alex, Tim, Lachy, and John are Slow Down Honey. They have spent their teen years writing, jamming, and playing small seaside pubs and private parties. The core of the band, Alex and Tim, have been playing music together since the age of 8 years old. They love the hard work, says Alex, “We’ve got an Aussie work ethic. It’s just no bullshit, no gimmicks, straight down the line song writing.”

Lee Kernaghan (born April 15, 1964 in Corryong, Victoria, Australia, is one of Australia's most popular and influential country singers and songwriters. Born in the bush, Corryong, Victoria, in the foothills of the Snowy Mountains high country is where Lee's life began. The son of a truck driver and later multi-platinum recording artist Ray Kernaghan, Lee spent his formative years growing up in the Riverina country of Southern NSW.

Fergus Brown is a musician from Sydney, Australia. www.myspace.com/fergusbrown

Soaring, beat-afflicted Post-Gaze New Wave, inducing moments of hair-raising and hip-thrusting? Yes please.
Some have described PAPA vs PRETTY as certain to “rock your face”. Others have urged you “catch them before they explode into a fireball of fame that is too bright for your puny mortal eyes to look at”.
Drum Media put it a little more simply when they said “…may god, strike me down if it isn’t the greatest thing I’ve heard all year…the arrival of what should soon be a formidable talent.”