Switchfoot is an alternative rock band from San Diego, California, United States. The band was formed in 1996 with the brothers Jon Foreman (lead singer/guitarist) and Tim Foreman (bass). Long-time friend Chad Butler (drums) joined soon after. Eventually the band evolved to what it is today with the addition of members Jerome Fontamillas (key/guitar/electronics - formerly of Mortal and Fold Zandura) and Drew Shirley (guitar - formerly of All Together Separate).

Based in Sydney, Australia, Front End Loader are self-described as "Australia's least popular, relatively well known band". Formed in 1991 FEL have always been a difficult band to categorize. Undeniably a hard rock band, they have avoided the traditional tattoos and hair of hard rock and as musicians, they tend closer to cock or math rock without the earnestness. Front End Loader have been supported by the likes of Regurgitator, The Superjesus and Shihad plus many others. They have a reputation for ferocious live performances and not holding their collective tongue.

Thurston Moore is an American musician best known as a singer and guitarist for Sonic Youth. Moore was born in Coral Gables, Florida and was raised in Bethel, Connecticut. Although he enrolled at Western Connecticut State University, he opted to move to New York City instead. There he learned to play guitar from Glenn Branca and soon co-founded Sonic Youth, serving as the band's guitarist and lead vocalist.

The Used is an American band from Orem, Utah. Their sound has been classified under many sub-genres of rock. They signed with Reprise Records in late 2001 and rose to fame in June 2002 after releasing their debut self-titled album, The Used. Soon after a CD/DVD package named "Maybe Memories" was released containing unheard demos and a "behind the scenes" story of the band/band's past. They followed up with their second album, In Love and Death, in September 2004 and their third album, Lies For The Liars, in May 2007.

Fresh on the back of their 2010 JD Set win which included a gig with iconic Aussie rockers 'Wolfmother' and a behind-the-scenes reality show on Chanel V, Sydney's New Navy are certainly on the brink of something special. Described by triple J’s Dom Alessio as “having a ton of potential, combining really well the sounds of Britain and the sounds of the U.S”, the young quartet draw influence from such great pop and indie acts as The Cure and Talking heads, combined with contemporary artists such as Vhs or Beta, Klaxons and The Editors.

Joy Division were a post-punk band formed in 1976 in Salford, Greater Manchester, UK. The band dissolved in May 1980 after the suicide of its lead singer, Ian Curtis. Much of their popularity/reputation arguably resulted from frequent playings on air by iconic DJ John Peel, but it is easy now to overlook the impact that the first album, Unknown Pleasures, had on post-punk music at the time, as reference the number of prominent bands that cited this album as an influence. The remaining members reformed as New Order and they have gone on to achieve much critical and commercial success.

Anika Moa (born 21st May 1980) is a singer-songwriter from Christchurch, New Zealand. While still at school in Christchurch, Moa entered the 'Smokefree Rockquest'.
She received a record deal with Warner Music in New Zealand and Atlantic Records in New York. The record company had big commercialized plans for her - which conflicted with her brash down-to-earth personality. Overall Moa did not enjoy her time in America and returned to base herself in New Zealand. Her first album was released in 2001.

Bush may refer to at least 2 artists: 1. A British grunge band
2. A Canadian rock band 1. Bush is an English alternative rock band formed in 1992. The group chose the name "Bush" because they used to live in Shepherd's Bush, London. Their first album, Sixteen Stone (1994), was a huge commercial success. Almost overnight, Bush went from playing small pubs in London to headlining arenas in the US, the result of extensive promotion on MTV and non-stop touring.

That soaring melodic tension between guitar and vocal, its bass lines, tinged with longing, and driving yet thoughtful rhythm section make Vertigo one of those rare bands whose offerings of gritty beauty and haunting intensity escape the trap of cliche and affectation. The four-piece band out of Knoxville, Tennessee, marries alt/pop lyricism and well-grounded composition with yearning themes and experimental musicianship, connecting with audiences in electric, deeply personal live performances. 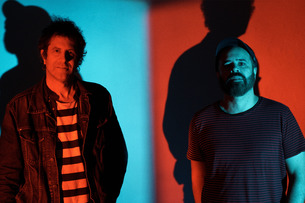 Swervedriver are a 1990s British guitar band initially associated with "shoegazing", however their heavier rock & roll style also related them to the grunge genre coming from the U.S. Pacific Northwest. Some music writers considered them to be Britain's answer to this sound. Regardless of labels, the band's mix of storming and swirling guitar experimentation often crossed into psychedelia, coupled with mystical lyrics that often praised the nihilism of sports cars, racing and the open road.

Their origins sprung from Oxford, United Kingdom in 1984 with the formation of a group called Shake Appeal, named after a song from one of their main influences, The Stooges. Consisting of vocalist/guitarists Adam Franklin and Jimmy Hartridge, lead vocalist Graham Franklin (Adam's brother), bassist Adi Vines, and drummer Paddy Pulzer; Shake Appeal went ahead reproducing the sounds of American garage rock of the late 60's and early 70's. The group wrote what would become Swervedriver's first classic "Son of Mustang Ford," however after a few years the band began to fall apart when both Graham and Paddy left.

The remaining three members drafted drummer Graham Bonnar, but by this time the group's sound mutated significantly under the influence of re-invented guitar music by American bands like Dinosaur Jr., and Sonic Youth. So with a new lineup and new sound came a new name, Swervedriver. Their hometown colleagues from fellow shoegazing group Ride passed their re-recorded demo of "Son of Mustang Ford" to Alan McGee of Creation Records; who, as legend has it, played the tape for the first time while cruising the inner streets of Los Angeles in a limo. The experience caused him sign the band immediately.

Merging the whirling qualities of the shoegazer genre with heavy distorted guitars, and lyrics often featuring cars and escapism, the group debuted with a series of EPs; "Son of Mustang Ford," "Rave Down" and "Sandblasted," before issuing their full-length album debut "Raise" in 1991. Then after a U.S. tour in support of Soundgarden, Bonner left the band; the departure of Vines followed shortly afterwards. Bonner and Vines would eventually go on to form a new group called Skyscraper. Swervedriver's final release with the original lineup, 1992's "Never Lose That Feeling" EP, appeared to be the group's last.

But in 1993, Swervedriver re-emerged with the core of Franklin and Hartridge along with newly recruited drummer Jez, and released their landmark album "Mezcal Head." If "Raise" was a product featuring a love of Americana, escapism and the open highway, then "Mezcal Head" was all that, but broadcast in IMAX with Dolby surround sound. Production and sound were greatly improved, and the album gave them their most successful single "Duel," hailed as one of the premier songs of the shoegazer genre. The album clearly forged a permanent link with their American fans, and made them more popular there than in their own native Britain. During this era, the fabled b-side "The Hitcher" found a release on the "Last Train to Satansville" EP. "The Hitcher" is widely considered to be a fan favorite.

1994 found the band adding new bassist Steve George, along with extensive touring of the U.S. (supporting The Smashing Pumpkins), Japan and Europe. However by then the shoegazing genre in Britain was dead, replaced by the more mainstream Britpop movement hi-lighted by bands such as Oasis and Blur. The massive rise of Britpop caused Creation Records to drop the band just one week after the U.K. release of 1995 album "Ejector Seat Reservation." It was never released in the U.S. where they could have capitalized on the momentum of "Mezcal Head." ESR was another leap forward for the band, incorporating a wider number of influences from Elvis Costello to Bob Dylan. It saw the group grow into rebel visionaries and received the highest critical acclaim; however without any record company support it was doomed to be their poorest selling venture. This began a period of protracted record label problems for the band which fans dubbed the Swervedriver label curse.

In 1996, Swervedriver signed on with Geffen Records with a multi-record deal, and promptly began recording their fourth album. However their contract was terminated when their A&R (Artists & Repertoire) representative was fired in a corporate downsizing. Once the legal dust settled the band was awarded their own recording studio along with the finished album, however it was still a major setback. Their fourth and final album "99th Dream" was finally released in 1998 after signing on with Zero Hour Records of the U.S., and it continued the evolution that began with "Ejector Seat Reservation." Drawing less from their earlier â€˜grunge' sound, the band never the less maintained their swerving, pyschedelic guitar rifts coupled with Franklin's magical lyrics and droning vocals, and was another brilliant body of work. The group continued to draw on a broader range of musical influences; for example the title track "99th Dream" was written as a prequel to Bob Dylan's song "115th Dream." Despite this album easily containing a half dozen possible hit singles, and a successful tour of the U.S., Britain and Australia; they did not break out beyond their traditional cult following. The "Wrong Treats" EP released in 1999 would become the bands last body of work as an extant group; they announced a hiatus later that year that persists to this day. Adam Franklin continues to release albums under his new band Toshack Highway.

In 2005, Castle Music released a Swervedriver anthology album titled "Juggernaut Rides" which brought together 33 songs; including many only available on rare EPs, and four that were previously unreleased..

In Late 2007 the Creation Records web site confirmed Swervedriver was reuniting for a 2008 tour.

How Swervedriver settled on their name has been the subject of debate among their fans for many years. During interviews whenever questioned on this topic, the band would simply respond that it was just a name; as The Beatles were just a name (in reference to that band's simple response in many early interviews). However Adam Franklin had once mentioned the band liked the connotation of a speeding driver, swerving and ultimately losing control of their car.