Space Invadas is duo from Australia: Katalyst - a Sydney-based award winning producer signed to BBE & Invada Records, and from the UK, Steve Spacek - the acclaimed voice behind the ground-breaking genre-pushing group Spacek (championed by everyone from Entertainment Weekly to Mos Def). Their award winning collaboration, "How Bout Us" was one of Gilles Peterson's top 20 tracks of 2008. Their forthcoming album is entitled "Soul-Fi". 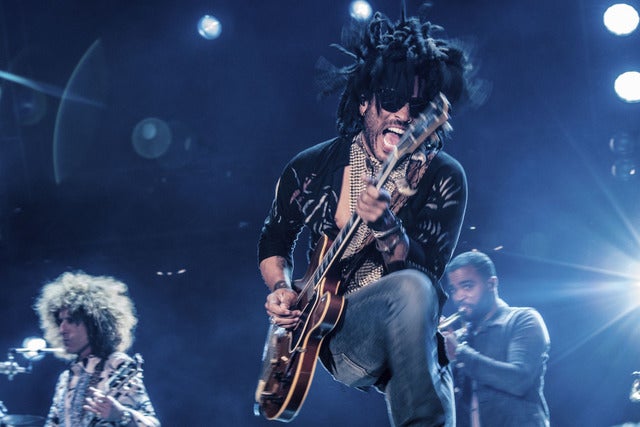 Leonard Albert "Lenny" Kravitz (born May 26, 1964. New York, USA) is an American singer-songwriter, record producer, guitarist and actor whose retro amalgam of rock, pop, funk, and even techno is inspired by such music icons as David Bowie, Jimi Hendrix and John Lennon. Like Prince and Sly Stone before him, Kravitz uses a multi-ethnic, mixed-gender backing band.

Kravitz plays guitar, bass, drums, keyboards, percussion, and sitar. He often plays these instruments on each recorded track, but frequently collaborates with other musicians as well when recording.

His 1989 debut album Let Love Rule was a moderate success. In 1991 he released his second album, Mama Said, which reached the top 40 of the Billboard album charts. In 1993, the album Are You Gonna Go My Way was released, reaching #12 on the Billboard 200 and Kravitz earned a Brit Award for best international male artist in 1994. He released the Circus album in 1995, which reached number 10 on the Billboard chart on the back of his past achievement. With 5 (1999), Kravitz embraced digital technology such as Pro Tools and samplers for the first time. He would win the first of his four consecutive Grammy for Best Male Rock Vocal Performance at the Grammy Awards of 1999.

His cover version of The Guess Who's hit "American Woman" won him another Grammy for Best Male Rock Vocal Performance at the Grammy Awards of 2000. Kravitz released a Greatest Hits compilation in 2000. It proved to be his most successful album. The single "Again" would earn him his third consecutive Grammy for the Best Male Rock Vocal in the Grammy Awards of 2001. Kravitz released his sixth album Lenny in October 2001. He won his fourth consecutive Grammy for Best Male Rock Vocal at the Grammy Awards of 2002. Kravitz's seventh album Baptism was released in May 2004. His album, It Is Time For A Love Revolution was released in 2008. He has always edited his albums on Virgin Records America. The lead single from Kravitzâ€™s ninth album, Black and White America, "Stand" was released on June 3, 2011. (Stand Songfacts).

Based in Adelaide, South Australia, The Transatlantics are an eight-piece deep funk and soul outfit inspired by the great soul performers of the late 60's and early 70's. The Transatlantics have played support to the likes of Roy Ayers (USA), Eddie Bo (USA), Russ Dewbury (UK), Ohmega Watts (USA), Nick RecordKicks (Italy), Nostalgia 77 (UK), The Bamboos (Melb) and in 2009 have appeared at major festivals including the Big Day Out, Parklife and Playground Weekender. They have released two 7" singles and have a debut album due for release in September 2009.

In March 2004, drummer Trent Bryson-Dean sat in on a gig with a jazz band called SCAT. He was very quickly impressed with the playing of Chris Poulsen (Fender Rhodes) that day and vowed to Chris and bassist Jeremy O’Connor that he would book a gig for the trio as soon as he possibly could.
True to his word, Trent was able to secure a gig at the Brisbane Powerhouse five months later in August. (With great wisdom he chose to name the group Chris Poulsen Trio rather than name the group after himself – a mere drummer!) The gig proved to be a great success...

Jamie Lidell (born September 18, 1973, Huntingdon, England) is a musician and soul singer, signed to Warp. Famed for his largely improvised shows, that see Jamie constructing his tracks live, voicing and layering right in front of your eyes, effortlessly whipping them out of the air and forging them into clanking electro riffs and deathprod funk grooves. Likened to Sly Stone, Prince and Little Richard, he is Britain's voice of soul for the new era.

The Funky Meters are give or take the same group as "The Meters", an American funk band based out of New Orleans, Louisiana. They were active between the late 60s until their breakup in 1977. They reunited later on, and went through a few new members, which resulted in the name change to "The Funky Meters". They were never extremely popular, and didn't receive much airtime on the radio, but are considered one of the leading funk predecessors.

Belleruche is a band consisting of Kathrin DeBoer, Ricky Fabulous, and DJ Modest. Formed in the lesser bars and pubs of North London in 2005, the band now record for the Brighton based Tru-Thoughts label. (They've got a new single out in August called 'Clockwatching'- video is up here: http://www.youtube.com/watch?v=oEDhY9H0f08) Influenced by vintage blues records, punk girl drummers, obscure 60's cover bands and experimental west coast turntablists, they describe their sound as 'Turntable Soul Music'.

Double the fun! 1.Fun Machine is a progressive rock band from New Jersey. They are on BNS Sessions. 2. Under the same moniker are a band of cheeksters from Australia who sweep lewd themes into tasteful funk-munched pop zest. More antics than yo' gran's garage.