I See Stars is an American post-hardcore band from Warren, Michigan, United States, formed in 2006. Their music combines elements of pop and hardcore.
The group released its debut EP, Green Light Go! in 2007 and several demos before signing with Sumerian Records in 2008, label on which they released their debut album, 3D, on April 14, 2009. The album featured a guest appearance from Bizzy Bone of Bone Thugs-N-Harmony. 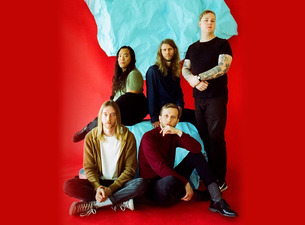 La Dispute, formed in 2004, is five close friends from Grand Rapids, Michigan with a firm passion for the concept of music and art as a medium for making new friends. As a result, La Dispute makes (or strives to make) music that is both artistically, technically, and emotionally engaging in hopes of establishing legitimate connections with any and all interested people, while encouraging dialogue between those people and themselves about things in life that truly matter and that truly last. La Dispute also carries a firm passion for the relevance of a live show, both for the bands involved and for the people in attendance, and will go to the grave believing that the environment created when strangers come together despite their differences to celebrate one important thing is invaluable and should not under any circumstances be taken for granted.
Their style combines elements of post-hardcore and screamo in a very experimental way to something that can hardly be put into a single genre.

Their first LP,Somewhere at the Bottom of the River Between Vega and Altair, was released November 11, 2008. The album was recorded at Studiotte in Grand Rapids by Joel and Troy Otte.

In late 2011 they released their second LP called Wildlife which has also been added as an accompaniment to the #224 issue of the german "Visions" music magazine. Read more on Last.fm. User-contributed text is available under the Creative Commons By-SA License; additional terms may apply.

Hailing from Los Angeles, Touché Amoré set themselves against the glamour and greed of their hometown culture with '...to the Beat of a Dead Horse', the passionate debut LP/CD released through 6131/Collect Records. Touché Amoré have become of vibrant part of the flourishing West Coast hardcore punk scene, successfully bridging gaps between subgenres. By playing their explosive and sincere music in every basement, VFW hall, club and space up and down the West coast...

There are at least 2 artists named The Blackout: 1) Welsh post-hardcore band.
2) Latvian stoner rock/southern metal band. 1) The Blackout are a band formed in 2003 in South Wales and drawing influences from across the board, they combine heavy crunching guitars, riffs, screams and thunderous drumbeats with beautiful melodies and emotionally driven vocals. The band has played shows in and around the UK with the likes of Lostprophets, Funeral for a Friend, Fightstar, Avenged Sevenfold, dredg, 18 Visions...

The Broderick are a Hardcore band out of Melbourne, Australia. Their debut E.P 'Illusion Over Despair' was released back in 2007 on Washed Up Records and was rated among the best hardcore releases of '07 by the listeners of SHORT. FAST. LOUD on Triple J. They're currently writing a full length due for release towards the end of 2010. Check out www.myspace.com/thebroderickhc for tour dates, news etc. Members:
MARC - Guitar
BEN - Bass
ASH - Drums
LOGAN - Vocals

Previously named This City Sunrise. A discography of previously released but not commercially made available material is now available at all online digital music retailers Once from Wellington but now relocated to Melbourne. Gatherer is a familiar feeling, delivered with unfamiliar sound. Beautifully haunting melodies, complex rhythms and a wall of sound so huge it's hard to comprehend how only three people can make it. Gatherer dares to be different. Gatherer is your dream girl’s music collection, listening to Converge during the day and Jeff Buckley at night.

Forming in Melbourne (Australia) in mid-2004. A DEATH IN THE FAMILY play unique blend of sonic rock & melody driven punk inspired by bands like Leatherface, Husker Du and Hot Water Music. After releasing a 5-track demo EP (now out of print) in Dec 2004, ADITF have spent the past 12 months playing alongside bands such as Blueline Medic, The Nation Blue, Ted Leo (USA), The Explosion (USA), Bodyjar, Sommerset (NZ), Away From Now and were lucky enough to support Leatherface (UK) on their first Australian tour in mid-2005.