Ben Kweller was born in San Francisco, CA in 1981. In 1982 his family relocated to Emory, TX where his father Howard Kweller became the town's first doctor. In 1986, The Kwellers moved to a much larger city, Greenville, TX. Ben was exposed to music at a very early age. Howard taught Ben how to play the drums when he was 7 years old. For the next year, the father and son would jam together almost every night after Howard got home from work. 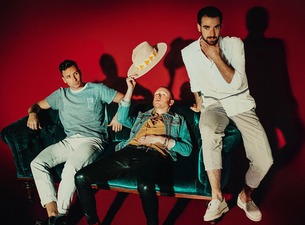 In the past year 18 year old Newcastle based singer/songwriter Beth Jeans Houghton has garnered a reputation as an antidote to the current crop of acoustic songstresses. With her alternative blend of experimental folk, Beth has been hailed by the NME as "a Joni Mitchell for the anti-folk generation". With influences ranging from Frank Zappa, Vashti Bunyan, Fourtet and Love, Beth has cultivated a sound that is truly her own.

There is more than one artist with this name: (1) Pedestrian (AKA The Pedestrian) is the pseudonym of rapper James Brandon Best. Possibly the least well known of anticon's co-founders, his first release, the 12" "The Toss & Turn", wasn't issued until 2004, though he had made several appearances on compilations and was part of one-off groups Stuffed Animals & Object Beings. Pedestrian's full-length debut, Unindian Songs, Vol. 1, came out in 2005. Asides from guest spots on records by other anticon accomplices such as Telephone Jim Jesus and Themselves, he has not released anything since.

Kurt Vile & the Violators are a rock band from Philadelphia PA, United States. The band draws influences from lo-fi, psychedelic and classic rock. Founded by frontman Kurt Vile (guitar, vocals), the band currently consists of Jesse Turbo (guitar, slide), Mike Zeng (percussion) and Adam Granduciel (guitar, bass). Kurt and Adam have played music together ever since the early 00's with each one contributing to the other's projects, most notably in The War on Drugs which is fronted by Granducial.

Eclectic, intimate and hypnotic Brisbane sextet, Founds, have had a fast start to their musical careers. With first single Gypsy Horse played regularly on Triple J and featured on the Triple J Unearthed playlist, late 2010 and 2011 has so far seen the Founds played at Big Day Out, support The Naked and Famous, Ben Ottewell (Gomez), Oh Mercy, Gossling, and a series of packed local shows. A raw energy glistens from their live performances in the vein of Yeasayer, Beach House, Blonde Redhead and Warpaint.