Muscle Car - hailing from Melbourne, Australia and inspired by the likes of Motorhead, Zeke and The Wildhearts, Muscle Car have a sound often described as motorpunk, brutal, heavy, loud, and the list goes on. This is Aussie rock n roll that's a full throttle powerhouse.

There are more groups with the same name: 1. Harlow a female fronted 80s/90s rock / AOR band.
Last known line-up: Theresa Straley - Vocals
Pat Regan - Keyboards
Tommy Thayer - Guitars
Todd Jensen - Bass
Steven Klong - Drums 2. Harlow was formed in 1985 in Kansas City, Missouri by Mickey Kravitz, a singer with a vision to put together a glam band like no other in Kansas City. Having been mainly influenced by bands like Sweet, T-Rex, Angel, Piper, and Starz, he started his search...

New Jersey's Chris Kosnik, Finn Ryan, and Bob Pantella first started plotting their musical careers back in the mid 90s influenced by 70s rock and progressive groups ranging from Black Sabbath to Parliament Funkadelic. Simultaneously all three members where already playing for major labels in separate bands: Godspeed (Atlantic), Monster Magnet (A&M) and Core (Atlantic). The Atomic Bitchwax slowly evolved for 15 years as a players band with the enduring vision to "play what you want".

Stone Sour is a three time Grammy Award-nominated American Alternative Metal/Hard Rock band from Des Moines, Iowa, USA The band was founded by Corey Taylor, vocalist of Slipknot, and former drummer Joel Ekman. Early days
Taylor's long time friend, Shawn Economaki, joined shortly after, and filled in as the bass player. The band had played clubs and bars with different guitarists - often filling the position for just one show. This time, Stone Sour recorded 2 demo tapes, in 1992 and 1994. Shortly after, in 1995, Jim Root - who is now also part of Slipknot with Taylor - joined the band.

Monster Magnet is an American stoner metal/stoner rock band, often cited as one of the most successful and influential in the genre. Hailing from Red Bank, New Jersey, the group was founded by Dave Wyndorf (vocals and guitar), John McBain (guitar), Tom Diello (drums), and Tim Cronin (vocals and bass). The band first went under the name "Dog of Mystery" and later "Airport 75", before finally settling on "Monster Magnet".

Foo Fighters are an American rock band formed by singer/guitarist Dave Grohl in 1995 in Seattle, USA. Grohl formed the group as a one-man project after the dissolution of his previous band Nirvana in 1994. Prior to the release of Foo Fighters in 1995, Grohl drafted Nate Mendel (bass), William Goldsmith (drums) (both of Sunny Day Real Estate and The Fire Theft), and Pat Smear (guitar) to complete the group.

Saul Hudson (born July 23, 1965), more widely known as Slash, is a guitarist best known as a former member of Guns N' Roses.
Slash was born in Hampstead, England to a English father, Anthony Hudson, and a black American mother, Ola, both of whom were involved with show business. Slash's mother designed David Bowie's costumes from The Man Who Fell to Earth, and his father was an artist who designed album covers for artists including Neil Young and Joni Mitchell. Hudson was raised in Stoke-on-Trent until the age of 11, when he and his mother moved to Los Angeles, California. 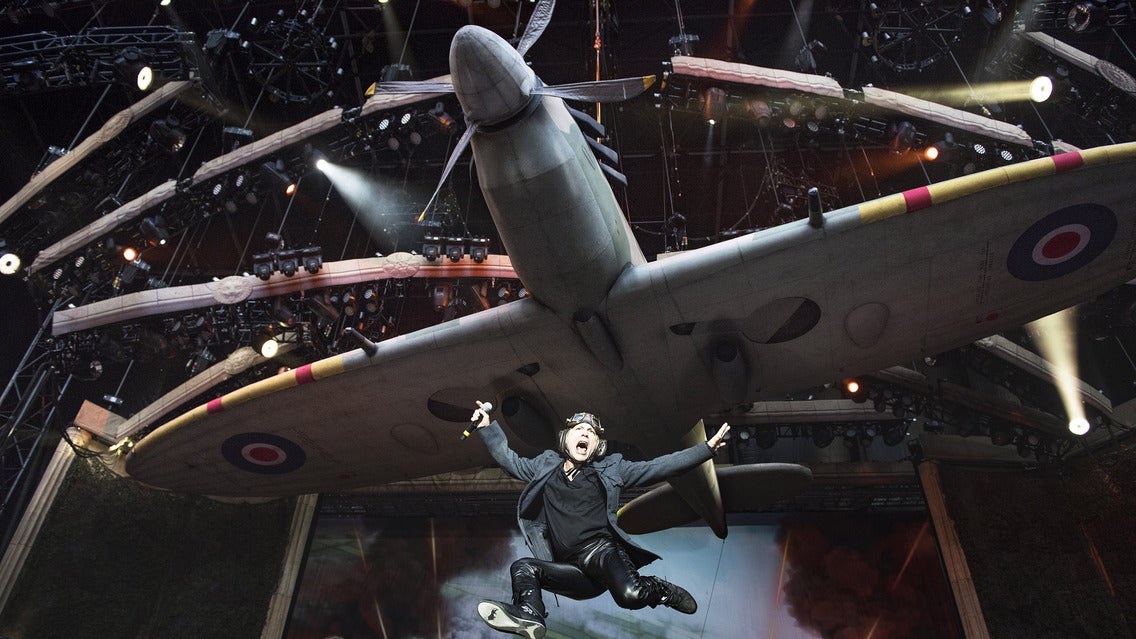 There are multiple artists with this name:

Pioneers of the New Wave of British Heavy Metal, Iron Maiden achieved initial success during the early 1980s. After several line-up changes, the band went on to release a series of US and UK platinum and gold albums, including 1982's The Number of the Beast, 1983's Piece of Mind, 1984's Powerslave, 1985's live release Live After Death , 1986's Somewhere in Time and 1988's Seventh Son of a Seventh Son. Since the return of lead vocalist Bruce Dickinson and guitarist Adrian Smith in 1999, the band have undergone a resurgence in popularity, with their latest studio offering, The Final Frontier, peaking at No. 1 in 28 different countries and receiving widespread critical acclaim.

Despite little radio or television support, Iron Maiden are considered one of the most successful heavy metal bands in history, with The New York Times reporting in 2010 that they have sold over 85 million records worldwide. The band won the Ivor Novello Award for international achievement in 2002. As of October 2013, the band have played over 2000 live shows throughout their career. For the past 35 years, the band have been supported by their famous mascot, "Eddie", who has appeared on almost all of their album and single covers, as well as in their live shows.

The band has changed their line-up several times up to 1999 when Bruce Dickinson and Adrian Smith returned to the band.

Their current line-up is:

Iron Maiden's work has inspired other sub-genres of heavy metal, including power metal and speed metal, and is generally thought of as an influence to any "metal" music containing dual-guitar harmonization. One example of their far reaching influence is that many bands from virtually every rock and metal sub-genre list Iron Maiden as one of their influences.

Many of the band's songs are based on history, folklore, movies and books, such as Aces High, Brave New World, The Trooper, The Clansman, The Wicker Man, The Prisoner, Where Eagles Dare, Out of the Silent Planet, To Tame a Land(based on Frank Herbert's Dune) and Rime of the Ancient Mariner â€“ in which words from the Samuel Taylor Coleridge poem are incorporated into the song.

2) Iron Maiden (later aka The Bolton Iron Maiden) is a late sixties doom-band. This Iron Maiden was formed in 1964 by Barry Skeels, Steve Drewett, Chris Rose and Alan Hooker as an acoustic band in Basildon, Essex that eventually evolved into a band called Iron Maiden. By 1966, the lineup was Skeels (bass), Drewett (vocals/harmonies), Rose (lead guitar), Tom Loates (rhythm guitar) and Stan Gillem (drums); they played Rolling Stones and blues numbers under the name "Growth". Reduced to a two-piece, Drewett and Skeels played blues under the name of "Stevenson's Blues Department" in pubs and clubs in Essex and London. They supported a number of up and coming bands including Jethro Tull, Fleetwood Mac, The Groundhogs and King Crimson.

In 1968, Drewett and Skeels were joined by Paul Reynolds (drums) and Trevor Thoms (guitar). They released an acetate (God of Darkness/Ballad of Martha Kent) under the then risquÃ© name of BUM. When they signed to the Gemini label in 1970, the name was changed to the less risquÃ© Iron Maiden. They recorded their debut album Maiden Voyage. Reynolds was replaced by Steve Chapman on drums and Iron Maiden released the single Ned Kelly/Falling. This coincided with Mick Jagger's film "Ned Kelly". A planned Australian tour fell through. The Gemini record label also folded (with the loss of the debut album master tapes) and Skeels left Iron Maiden. The band carried on without him for a while, but the debut album was not released until 1998 using duplicate tapes owned by Skeels. This "original" Iron Maiden is often considered by fans as one of the earliest 'true' doom metal bands.

However, soon after the "original" Iron Maiden was re-discovered , their name was officially changed to 'The Bolton Iron Maiden' since the Iron Maiden led by Steve Harris already had the name 'Iron Maiden' trademarked. Read more on Last.fm. User-contributed text is available under the Creative Commons By-SA License; additional terms may apply.

Guns N' Roses is an American hard rock band founded in Los Angeles, California in 1985. The band has released six studio albums: Appetite For Destruction in 1987, G N' R Lies in 1988, Use Your Illusion I and Use Your Illusion II in 1991, The Spaghetti Incident? in 1993 and, after 15 years and with frontman Axl Rose being the only member of the original lineup remaining, Chinese Democracy in 2008. They also released an EP titled Live Like A Suicide in 1986.