There are two artists with the name "DE LA CRUZ." 1. DE LA CRUZ is the name of an Australian glam metal band, whose lead guitarist is Casey Jones. 2. DE LA CRUZ is the German DJ Jonathan De La Cruz. In 1997 his trance-house-track "Tonight (In My House)" was a big club-hit in Germany. 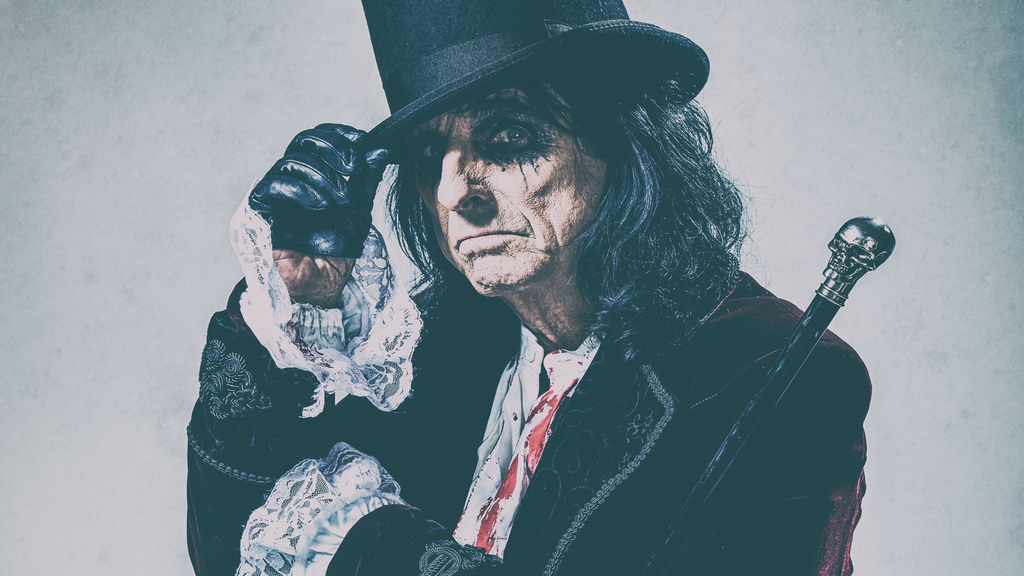 Alice Cooper is both the name of an American rock band formed in Phoenix, Arizona, in 1964 and subsequently the name of the band's lead singer (born Vince Furnier) who legally changed his name to Alice Cooper and had a solo career under that name after the band became inactive in 1975.

Alice Cooper, the band consisted of lead singer Vince Furnier (stage name Alice Cooper), Glen Buxton (lead guitar), Michael Bruce (rhythm guitar, keyboards), Dennis Dunaway (bass guitar), and Neal Smith (drums). After several years of little success, the band rose to fame in 1971 with the hit single "I'm Eighteen" and the album Love It to Death. Success continued with the popular single "School's Out" and the album of the same name in 1972. The band peaked in popularity in 1973. After the breakup in 1975, Vincent Furnier took "Alice Cooper" as his own name. Bruce, Dunaway and Smith went on to form the short-lived band Billion Dollar Babies.

Alice Cooper (born Vincent Damon Furnier, February 4, 1948) is an American rock singer, songwriter, and musician whose career spans five decades. With a stage show that features guillotines, electric chairs, fake blood, boa constrictors, and baby dolls, he is considered by fans and peers alike to be "The Godfather of Shock Rock"; Cooper has drawn equally from horror movies, vaudeville, and garage rock to pioneer a grandly theatrical and macabre brand of rock designed to shock.

Originating in Phoenix in the late 1960s after Furnier moved from Detroit, Alice Cooper was originally a band consisting of Furnier on vocals and harmonica, lead guitarist Glen Buxton, Michael Bruce on rhythm guitar, Dennis Dunaway on bass guitar, and drummer Neal Smith. The original Alice Cooper band broke into the international music mainstream with the 1971 hit "I'm Eighteen" from the album Love It to Death, which was followed by the even bigger single "School's Out" in 1972 which reached No 1 in the UK. The band reached their commercial peak with the 1973 album Billion Dollar Babies.

Furnier adopted the band's name as his own name in the 1970s and began a solo career with the 1975 concept album Welcome to My Nightmare. In 2011 he released Welcome 2 My Nightmare, his 22th album as a solo artist. Expanding from his Detroit rock roots, in his career Cooper has experimented with a number of musical styles, including conceptual rock, art rock, hard rock, heavy metal, new wave, pop rock, experimental rock and industrial rock.

He released the album "Paranormal" in 2017. It contains 2 new tracks with the original members of the Alice Cooper Band from the early '70s. Read more on Last.fm. User-contributed text is available under the Creative Commons By-SA License; additional terms may apply.

From the back streets of Sydney’s Inner-West, L.U.S.T. are a band of four who play a unique brand of rock. Fusing the obnoxious anarchy of '70s punk rock with the guitar driven trash of '80s hard rock, L.U.S.T. are a fast and hard punch to the throat. With a new history on the road ripping apart venues L.U.S.T. have bonded with many Australian touring acts including LORD and the Hell City Glamours.

Scissor Sisters is a four-piece glam pop / disco band, from New York City, NY, USA. The band was formed in 2000, by Jason Sellards (aka Jake Shears - lead vocals) & Scott Hoffman (aka Babydaddy - keyboard / bass). Other members are Ana Lynch (aka Ana Matronic - lead vocals) & Derek Gruen (aka Del Marquis - guitar).
Randy Schrager (aka Randy Real), is the band's live drummer. Patrick Seacor (aka Paddy Boom), left band in 2008. The group was named after a sex position between two women. Lyrics are largely written by Shears / Babydaddy & known for a mixture of wit & tragedy.

Born in Scotland in 1946, Jim Keays was lead singer for Australian band the Master's Apprentices until 1971. He recorded his solo debut album, The Boy From The Stars, in 1974. A science fiction concept album, it reached #13 in Melbourne. The title track was released as a single. 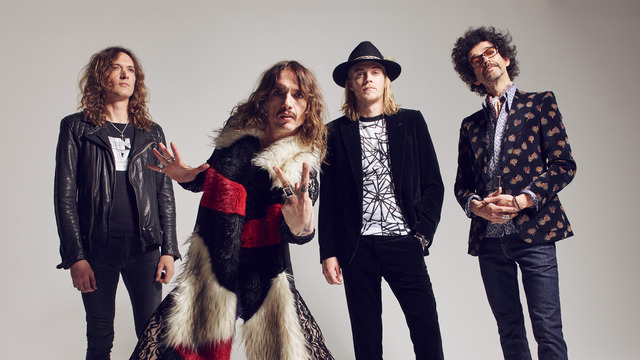 1. The Darkness are a hard rock band which formed in Lowestoft, England in 2000. The band consists of Justin Hawkins (vocals, guitar, keyboards), Dan Hawkins (guitar, vocals), Frankie Poullain (bass) and Ed Graham (drums). According to the Nothin's Gonna Stop Us Songfacts, Ed Graham inspired the bandâ€™s name as his youthful bleak moods were known as The Darkness.

They are widely regarded as a glam rock band, but the members disputed this and saw themselves as a classic hard-rock band. Their highly retro style of music was influenced by rock bands like Queen, AC/DC, Guns N' Roses, Aerosmith, Sparks, Led Zeppelin, Van Halen, T. Rex, Def Leppard, Whitesnake and Thin Lizzy. They are best known for the soaring falsetto of their lead singer Justin Hawkins, whose departure in 2006 resulted in the dissolution of the band. In 2011, the band announced their return, with a third album, "Hot Cakes," to be released on Wind-up Records.

Dan had initially seen his brother's potential of being a frontman after Justin did an impressive recreation of Queen's 'Bohemian Rhapsody' at a New Year's Eve party in 1999, thrown by Justin and Dan's aunt in her pub The Swan at Gillingham just over the River Waveney in Norfolk, despite the fact that Justin was only miming to the original song. Playing at first only in pubs and bars, their pyrotechnic guitar solos and over the top performances soon brought them to public knowledge.

Achieving major success in the UK in 2003, The Darkness received considerable radio airplay of their singles, including I Believe in a Thing Called Love and the Christmas hit Christmas Time (Don't Let the Bells End). Their debut album, Permission to Land, reached number one in the UK charts and went on to sell one and a half million copies in the UK alone. The success of this album led to heavy touring for the band, which included headlining the Carling Festivals in 2004. The band won three Brit Awards in the same year, including Best Group, Best Rock Group and Best Album. They also won two Kerrang! awards for Best Live Act and Best British Band.

By late 2004 the band's huge success had led to a public backlash, and people claiming that the band were more a joke than a 'real' band became more common. The band responded to this criticism by touring the UK's top arenas on the "Winter-National Tour" tour with the Irish group Ash supporting them. One part of the show included Justin climbing upon a life-sized white tiger during "Love on the Rocks with No Ice" and being elevated around the audience whilst still playing guitar. The majority of the shows on the tour sold out.

On May 23, 2005 original bass player Frankie Poullain left the band during the recording of their second album, apparently due to "musical differences" with Justin Hawkins. Frankie has disputed this version of events, claiming he was "frozen out" and forced to leave the band by Justin and his longterm girlfriend (and the band's manager) Sue Whitehouse. On June 13 2005, The Darkness announced that Richie Edwards, formerly Dan's guitar technician, had replaced Frankie as bass player.

One Way Ticket, the first single from their second album, was released on 14 November 2005, debuting and peaking at number 8 on the UK Singles chart. The Darkness followed this with their second album One Way Ticket to Hell...And Back on November 28, 2005 to mixed reviews despite it having been produced by the well known Roy Thomas Baker whom has worked with bands such as Queen. Although it has been made platinum its sales do not come close to their debut's five-times-platinum rating and its chart peak at number eleven is a weak showing compared to Permission To Land's number one. The second single release from this album was Is It Just Me?, released on 20th February 2006 and charted at number eight. Soon afterwards Justin announced while performing live that the third single to be released from the album would be Girlfriend; and gained a mixed response. Released on 22nd May 2006, it charted at a disappointing number thirty-nine.

After having disappeared for quite some time the band announced that singer Justin Hawkins had left the band on 11th October 2006, after a battle against drugs.

On December 24, 2006, it was reported by Yahoo! News that bass player Richie Edwards would become the group's new frontman, with Toby MacFarlaine to join The Darkness and take over on bass. In blog entries on MySpace, Richie Edwards, Dan Hawkins and Ed Graham said that they had started recording a new album with Toby McFarlaine, and that they had formed a new band together.

On March 2, 2007, The Darkness' official website was changed, showing a photograph of the new, and as yet unnamed band. Links to the members individual Myspace pages were included, confirming the line-up of Richie Edwards, Dan Hawkins, Toby MacFarlaine and Ed Graham. Richie later added a message to the site, categorically confirming that the band would not continue under the name "The Darkness", saying "we are literally days away from announcing our new name".

It was announced on August 25, 2007 that the band had finished recording an album but no release dates or names, of either the band or album, had been decided. Record label and support has yet to be decided.

On November 9, 2007, it was announced on The University of East Anglia's student union website that the new band would be called Stone Gods. This name was confirmed on the official website on November 21, 2007. The line-up has been confirmed as Dan Hawkins (lead guitar), Toby MacFarlaine (bass), Ed Graham (drums) and Richie Edwards (vocals/guitar).

In March 2011, The Darkness announced on their newly updated website that they would be reforming the original line-up to play the Download Festival in Donington, Derbyshire. Songfacts reports that Nothin's Gonna Stop Us, the first new material from the band since they reconvened, was made available several months later as a free download from The Darknessâ€™s official website.

The Darkness will be releasing "Hotcakes," their first album since reuniting, in 2012 on Wind-up Records. This album includes the singles "Every Inch of You" and Everybody Have a Good Time." Read more on Last.fm. User-contributed text is available under the Creative Commons By-SA License; additional terms may apply.

1. John Paul Young, b. June 21, 1950 (Glasgow, Scotland). After relocating to Sydney in 1966, he was 'discovered' by songwriters and record producers Harry Vanda and George Young. His breakthrough came in 1978 with the worldwide dance hit "Love Is In The Air,", peaking at #2 on the Australian charts, #7 in the USA, and #5 in the UK. He gradually faded into history, until the film "Strictly Ballroom" was released in 1992, featuring a remixed version of "Love Is In The Air.

Suzi Quatro (born Susan Kay Quatro, June 3, 1950, Detroit, Michigan) is an American singer-songwriter, musician, radio personality and actress. Suzi grew up in the States, experiencing the rock 'n' roll revolution as it happened. She became an icon of the 70's glam rock era with her tough girl image that went on to influence other female acts that arose in her wake, including The Runaways and L7.