Maya Jupiter is an Australian rapper & radio personality. Maya was born in La Paz, Mexico. She is of mixed Mexican and Turkish origin. Her family moved to Melbourne, Victoria when she was one year old, they then relocated to Sydney, New South Wales when she was four. She grew up in Busby, a suburb in South-Western Sydney. In 2003 she released her first album entitled Today, on Mother Tongues, the first label in the world dedicated to developing women in hip-hop music.

The New Boyz are a hip hop group and jerkin' crew from Hesperia, California comprised of rappers Earl "Ben J" Benjamin and Dominic "Legacy" Thomas. After meeting as freshmen at Hesperia High School they released their debut single You're a Jerk, which was based on the local dance style of jerkin'. It became a national hit and paved the way for them to release their debut album Skinny Jeanz and a Mic in September 2009 and release another successful single, Tie Me Down featuring Ray J.

Deez Nuts from Melbourne, Australia is a hardcore project with elements of rap from ex-I Killed the Prom Queen drummer, J.J. Peters. Deez Nuts started after Australian metalcore band I Killed the Prom Queen decided to split up. In 2007, J.J. Peters did his first tour tour of Australia. Then in January 2008 he toured with Canadian band Silverstein, also on that tour were Set Your Goals, The Amity Affliction and capside. Their debut EP "Rep Your Hood" was released on the 20th of August. September 2008 marked Deez Nuts second tour of Australia.

Grandmaster Flash (born Joseph Saddler on January 1, 1958 in Barbados) is a hip hop musician and DJ; one of the pioneers of hip-hop DJing, cutting, and mixing. Saddler's family migrated to the United States, and he grew up in the Bronx. He became involved in the earliest Queensbridge, New York DJ scene, attending parties set up by early luminaries. Learning from Pete Jones and Kool Herc, he used duplicate copies of a single record and two turntables but added a dextrous manual edit with a...

The Nextmen are critically acclaimed DJs and producers working with a range of hip-hop artists. Dom Search (aka Dominic Betmead) and Brad Baloo (aka Brad Ellis) often express a funk and reggae influence, and they have worked with many urban artists from the UK, US and Jamaica. The two members also run their own independent record label, Custom Records, a joint venture with Fat City Records. Their name is a reference to the Afro-American term "next man", which is explained on Urban Dictionary and can be heard in use in the song Find A Way (lyrics at OHHLA.com).

Tramar Dillard (born September 17, 1979 in Miami, Florida), better known by his stage name Flo Rida, is an American rapper signed to Poe Boy Entertainment. He began his rap career touring with 2 Live Crew and was then featured on DJ Khaled's album We The Best in 2006. He released his debut album Mail on Sunday in 2008 and it's lead single, Low featuring T-Pain, held a run of 10 weeks at #1 on the Billboard Hot 100. In 2009, his released his second album R.O.O.T.S, and it's first single, Right Round featuring Ke$ha, was #1 for six weeks.

dead prez is a hip-hop duo from the United States, composed of stic.man and M-1, and formed in 1996 in New York. They are known for their sometimes confrontational style, combined with socialist lyrics focused on both militant social justice, and also positivity. The duo maintains an ethical stance against corporate control over the media, especially hip-hop record labels.

This is an incorrect name for Sabac. Please update your tags. 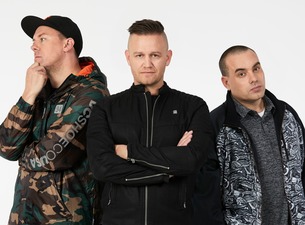 Hilltop Hoods are an Australian a hip hop group, formed in 1991, from Adelaide, South Australia. Their name refers to Hilltop Road In Blackwood, an Adelaide suburb in which they lived as children, and a part of Adelaide known by all the local B-Boys as The Hilltop. One day, another local rapper, Flak from the Cross Bred Mongrels, said that's what they should call themselves, and the name stuck.

The group formed when MCs Suffa and Pressure met at high school. When they later hooked up with DJ Debris through a mutual friend, the trio was complete.

They were inspired by American hip hop artists such as KRS-One, Gang Starr and Pete Rock, who encouraged them to spread this style of music in Australia.

Aside from their own albums, they have featured on a number of highly respected compilation albums, including Obesecity and Culture of Kings Vol. 1 & 2, and have collaborated with most of the main players of the Australian hip hop scene including Koolism, Mass MC, Pegz, Muphin, Layla, Hyjak and Bonez.

They have played many large Australian music festivals, including the Big Day Out, Splendour in the Grass and Falls Festivals. They have received nominations for the Best Hip Hop Act in 2001 and 2002 at the 3D World Dance Music Awards, won the APRA award for best up-coming group as well as receiving number one positions in independent charts all around Australia.