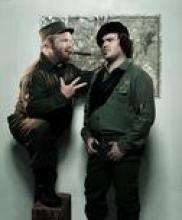 Tenacious D (often referred to as "The D" and sometimes introduced as "The Greatest Band in the world. Period.") is an American satirical rock duo formed by musicians and actors Kyle Gass and Jack Black in Los Angeles, California in 1994. Their music fuses vulgar absurdist comedy with rock music in a style that critics have described as "mock rock". The band first gained reputation in 1999, starring in a self-titled HBO TV series.