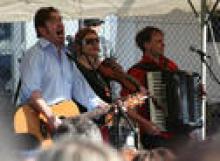 Weddings Parties Anything, often known as WPA and Weddoes, is an Australian folk rock band formed by Mick Thomas in Melbourne in 1985 and continuing until 1998. Their name came from a Clash song ("Revolution Rock") and musicologist Billy Pinnell described their first album as the best Australian rock debut since Skyhooks' Living in the '70s. WPA initially gained a reputation as a hot new band through their constant touring in their early days, however they never really became a commercial success.

Upcoming Events for Weddings Parties Anything