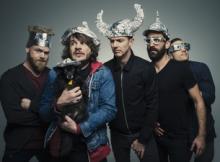 Karnivool is a five-piece progressive rock group based in Perth, Australia that was formed by Ian Kenny in 1996, who at the time filled the roles of both guitarist and vocalist for the band while they played Carcass and Nirvana covers. Their name stems from the band being initially described by local fans as "a bunch of clowns". Their style of music can be classified as both progressive rock and alternative rock, with alternative metal undertones. Major influences of the band are Nirvana, Radiohead, Meshuggah, Pink Floyd, Tool, Soundgarden and Carcass.