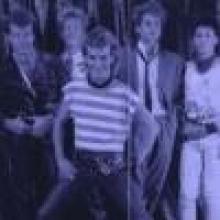 Uncanny X-Men formed in Melbourne as a guitar pop band in 1981 and worked the pub rock circuit. Original line-up included Chuck Hargreaves on guitar, Steve Harrison on bass guitar, Brian Mannix as lead singer, Nick Manthandos on drums and Ron Thiessen on guitar. Mannix became known for his mischievous and comical send-ups of other artists. The band was signed by Mushroom Records early in 1982 and released their debut EP Salive One in November, which peaked at #15 on the Kent Music Report. They toured Australia in support of US rock act Joan Jett and the Blackhearts.