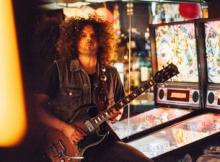 Wolfmother is a Grammy Award-winning hard rock band formed in Sydney, New South Wales in 2000. The band originally consisted of Andrew Stockdale (guitar, vocals), Chris Ross (bass, keyboards), and Myles Heskett (drums), though Ross and Heskett left the band in August 2008. With the original line up Wolfmother released one album, Wolfmother, and six singles, the highest-charting of which was "Joker and the Thief" which reached number eight in Australia.

In 2004 Wolfmother began appearing at several high profile music events, such as Homebake and the Big Day Out. They also released their debut self-titled EP through Modular Recordings.