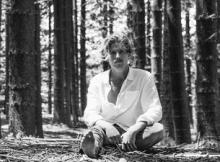 Ziggy Alberts is a home-schooled songwriter, free surfer & environmental enthusiast based out of Byron Bay, Australia. Picking up a left handed guitar in 2011, Ziggy has supported the likes of Ash Grunwald, Nick Saxon, Benjalu San Cisco, Daniel Champagne, Dustin Thomas & Mat Mchugh, with performances at both Bluesfest & Splendour in the Grass in 2014. Ziggy has been touring independently both nationally & internationally, singing heartfelt stories of personal endeavours & coastal folk upbringings.