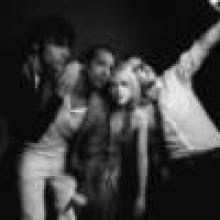 Metric is an indie rock band formed in 1998 at Toronto, Canada and based at various times in Montreal, London, New York City and Los Angeles. The band members are Emily Haines (vocals, synthesizers), James Shaw (guitars), Josh Winstead (bass) and Joules Scott-Key (drums). Initially Metric was a duo made up by Haines and Shaw, then in 2001 Winstead and Scott-Key joined the band. They took the name "Metric" in 1999 after a synthesizer beat that Shaw used on his sampler and as a reference to their musical precision. The group's music encompasses elements of indie rock, new wave and dance music.