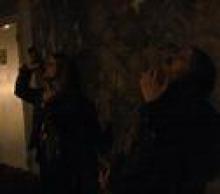 There are at multiple artists with the name Rust
1) A Finnish alternative metal band
2) A British psychedelic rock band with an album released in 1969
3) A Greek heavy metal band formed in 1984
4) An Australian street punk band
5) A Norwegian rock band
6) A 90s San Diego, CA band
7) A 13 year old British Rapper with tunes on youtube
8) A Finnish grindcore/mincecore band 1)
These four Finns demonstrate an incredible amount of talent, dedication and versatility in their music best described as alternative metal.