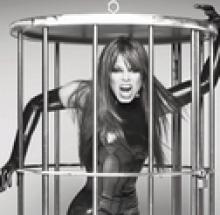 Janet Damita Jo Jackson (born May 16, 1966 in Gary, Indiana, United States) is an iconic Grammy award-winning, and Golden Globe and Academy Award-nominated American singer, songwriter, record producer, dancer, and actress. The youngest of the Jackson family, she initially stepped into the limelight in the family's 1974 Las Vegas production, 1976 television show, and later on her own as a television actress. At age sixteen in 1982, she signed a recording contract with A&M, releasing her self-titled debut album Janet Jackson that same year, followed by Dream Street (1984).