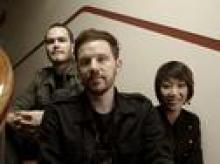 "Check into Decortica’s Love Hotel and experience the pleasures of a masterful album and allow your jaw to fall." -The NewReview (rating: 5/5) Decortica is an alternative/progressive rock act from New Zealand. Following on from the 2008 debut “A New Aesthetic,” the band’s second album “Love Hotel” was released August 2010. As evidenced by the lead single “Monster in a Pretty Dress,” this a modern rock album that sees the band explore several new sonic and technical territories. The end result is a precisely crafted balance of the band’s renowned explosive performance and mature song writing.