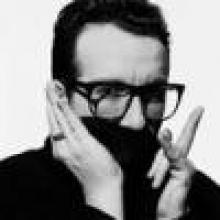 Declan Patrick MacManus was born 25th August 1954, in St Mary's Hospital, Paddington in London. He is the son of trumpeter, vocalist and bandleader Ronald (“Ross”) MacManus and record store manager Lillian Costello. His family had roots in Merseyside and he moved to Birkenhead at age 16, with his mother, when his parents separated. He is better known by the name Elvis Costello - a stage name suggested by Stiff Records manager Jake Riviera - but has used many other aliases including The Imposter and Napoleon Dynamite*.