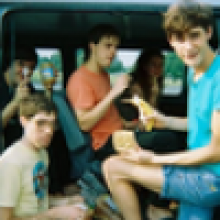 There are six of them: Al, Ben, Will, Michael, Alice, and Bennett. They're from Memphis. Their debut album is called "Memphis" and was released on 24th August 2010. According to The Guardian, "their songs are so Beach Boys 1963-4 they should only be heard in a Deuce Coupe."
They have a new official video out of "Superball" available on youtube.