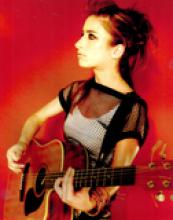 Diana Anaid kick started her musical career by making her self titled debut album and sending a copy to the national Australian youth radio network Triple J. The radio station picked up on the albums first track “I Go Off” and began playing it with an immediate response from the listening audience across the country. Diana’s first album, released through independent record label Origin Recordings in Australia. Diana was nominated as “Best Female Performer” for the 2000 ARIA awards (Australian Grammy’s).