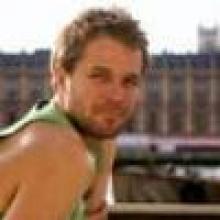 Carus Thompson is the vocalist, guitarist and songwriter of the Australian reggae band Carus and The True Believers. Carus was born in Fremantle, Australia in 1976. He developed a taste for music at a young age and began playing musical instruments at 12 years of age. By the time he turned 18 Carus was making a living out of performing and so he began the band, Carus and The True Believers. Carus describes his music as being a mix of roots, folk, reggae, and funk, though in a recent interview pointed out he would like his music to be known mainly as "Australian.