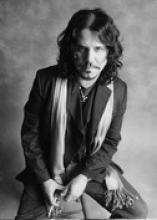 There is more than one artist with this name: 1. Canadian ex-frontman of The Tea Party.
2. A musician from Dublin, Ireland.
3. An American singer and drummer.
4. Lead artist behind the band Idaho 1) Jeff Martin was the lead vocalist and frontman of the Canadian rock band The Tea Party who is currently based in Perth, Australia. After the band broke up in 2005 he launched a solo career, and released his first solo album titled Exile and the Kingdom in April 2006.