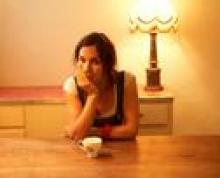 Holly Throsby is a singer-songwriter originally from Sydney, Australia but currently based in London. Holly's songs are mostly set at night, and are built around finger-picked guitar and her distinctive, fragile voice. The arrangements, which incorporate double bass, piano accordion, melodian, clarinet and the barest of vocal recordings, are both delicate and painterly. She has released three full length albums- On Night in 2004, Under The Town in 2006 and A Loud Call in 2008. She was nominated for an ARIA award in 2006 for Best Female.