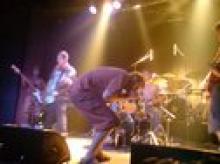 Captain Cleanoff is a complete grind holocaust. The band formed in the South Australian town of Mt Gambier in 1996 with Christian Dicer on drums before moving to Adelaide sometime afterward. Heath Twigden replaced Dicer in 1997. When early bassist Michael Slottagraf left the band, Johnson played bass until White joined the fold. Murray replaced Twigden in 2001. Captain Cleanoff played at Metal for the Brain in 2003.