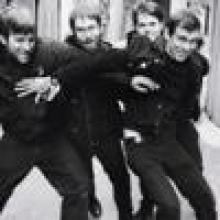 Against Me! is a punk rock band originally from Naples, Florida, and later relocated to Gainesville, Florida. They are known for their heavily folk-influenced sound and energetic live shows (Spin named them one of the 25 greatest live bands in 2006). Their first full-length album, released on No Idea Records in 2002, was the highly-acclaimed Reinventing Axl Rose. In December 2005, they signed to Sire Records, and released their major label debut, New Wave, on July 10, 2007.

Upcoming Events for Against Me!