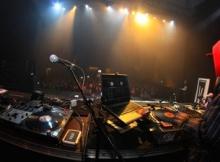 KOTA The Friend is an artist from the downtown section of Brooklyn, New York. At a young age he was exposed to hip hop, R & B, Jazz and Soul music during the infamous 90's era. By the time young KOTA was 8 years old he joined his schools music program and excelled as a trumpet player. In high school KOTA was the leader of the trumpet section while teaching himself to play the guitar and piano. During this time he also picked up two weekend jobs to build a home studio where he would record hip hop tracks as well as folk songs that were accompanied by his guitar playing.

Upcoming Events for Kota the Friend