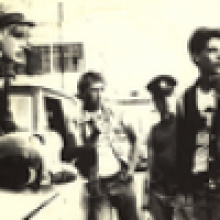 1) Vancouver's D.O.A. were an early and extremely influential punk rock band. Formed in 1978, they quickly got down to business by releasing the Disco Sucks EP on singer/guitarist Joey Shithead's own Sudden Death label. Along with other early pioneers, they blazed the trail to a North American punk scene by putting out records and touring with virtually no existing 'scene' infrastructure to rely on. Early shows included clashes with audience members and police, and they can attest that police riots at punk shows were not strictly an LA occurrence.