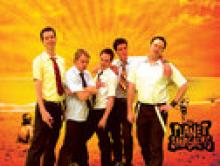 Formed in 1994 in Montreal, Quebec, the Planet Smashers’ infectious pop infused melodies, rippin’ horn licks and killer live shows, quickly established them as the city’s “Kings of Ska”. They released their first album (“Self-Titled”) on Planet Smasher’s founder Matt Collyer’s own label STOMP Records and hit the road. By 1997 they were no longer a local band, but a national phenomenon, headlining shows across Canada and pushing their second record, “Atttack of The Planet Smashers” which reached 2 on the national college radio charts for 2 months straight.

Upcoming Events for The Planet Smashers