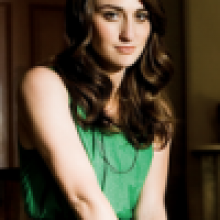 Sara Beth Bareilles (born December 7, 1979) is a Grammy-nominated American singer-songwriter and pianist. Bareilles was born and raised in Eureka, California, United States. After graduating from UCLA in 2002, Bareilles performed at local bars and clubs. She issued two demos of mostly live tracks in 2003: The First One in April and The Summer Sessions in October. In January 2004, Bareilles released her first studio album, Careful Confessions.