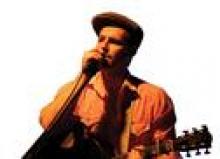 Dave Anderson is singer/songwriter based in Melbourne. He released his debut album Wish It All Away in August 2008. "Makes it clear he sings from his heart, not somebody else's" 4/5 Sydney Morning Herald
"Would sit comfortably on the shelf next to your Pete Murray CD's" 3.5/5 Sunday Telegraph Currently recording the follow up album, under playing in Melbourne as Dave Anderson & The Wine Merchants.