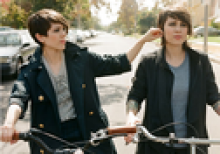 Tegan Quin and Sara Quin (born in Calgary, Alberta, Canada on September 19, 1980) are identical twins and Canadian singer-songwriters, performing as Tegan and Sara. They initially played as Plunk in 1995, and lacked a drummer and bass player. In 1997, they used their school’s recording studio to record two demo albums: "Who's in Your Band?" and "Play Day". In 1998, they made an early breakthrough by winning Garage Warz Battle of the Bands, a local music competition in Calgary.

Upcoming Events for Tegan and Sara