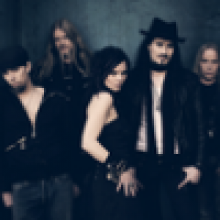 Nightwish is a symphonic metal band, formed in the town of Kitee, Finland in 1996. The band currently consists of Tuomas Holopainen (keyboards), Marco Hietala (bass, vocals), Emppu Vuorinen (guitars), Jukka Nevalainen (drums and percussion) and Anette Olzon (vocals). Anette Olzon was announced to be the replacement for former vocalist and frontwoman Tarja Turunen in 2007 after the latter was fired in 2005. She has appeared on Dark Passion Play, Made in Hong Kong (And in Various Other Places) and Imaginaerum, as well as the two-year Dark Passion Play tour.