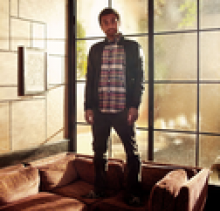 Aziz Ansari (born February 23, 1983) is an American actor and comedian. He is best known as one of the stars of the critically acclaimed sketch comedy series Human Giant on MTV, for which he is also a writer and executive producer. Ansari now appears in a new NBC series, Parks and Recreation, from producers of The Office. Official website: <a href="http://azizisbored.tumblr.com/" rel="nofollow">http://azizisbored.tumblr.com/</a>