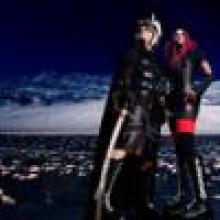 Hanzel Und Gretyl are an American industrial metal band formed by members Loopy and Vas Kallas. They formed in 1993, sharing a vision of the future which focused on the rise of machines to power over Earth, and having the tools needed to turn that vision into music. Their first album "Ausgeflippt" was released on Energy Records. The album, translating to "flipped-out" in German, received great reviews, while their dance single "Shine 2001" reached #1 position on the Alternative press Dance Chart. The duo formed a live band, recruiting Ginger Bread on bass and Pat 5000 on drums.