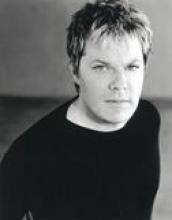 Edward John Izzard (born February 7, 1962) is a British stand-up comedian and actor. He has a very individual style of rambling, surreal monologue. He has turned his attention to acting as well as maintaining his demanding touring schedule.
Early life and career
Izzard was born in Aden, Yemen, as the youngest son of John and Ella Izzard. In 1963, shortly before Britain abandoned the capital of Aden, the Izzards moved to Northern Ireland.