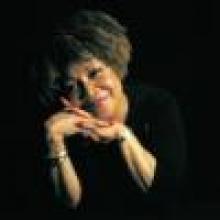 Mavis Staples (born July 11, 1940 in Chicago, Illinois) is an American rhythm and blues singer. Most of her career has been as lead singer for The Staple Singers. She first recorded solo for the Stax subsidiary Volt in 1969. Subsequent efforts included a Curtis Mayfield-produced soundtrack on Curtom, a nod to disco for Warner Bros. Records in 1979, a stab at electro-pop with Holland-Dozier-Holland in 1984, and a collaboration with Prince in the late 1980s and early 90s (producing the two solo albums Time Waits for No One in 1989 and The Voice in 1993, and various other collaborations).