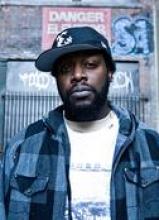 Guilty Simpson is an MC from the hailed hip-hop scene of Detroit. Guilty was introduced to many through J Dilla who first included him on "Strapped" from Jaylib's "Champion Sound" LP. Since then, Guilty has risen higher and higher in Hip-Hop's collective conscience alongside peers like Black Milk, Phat Kat, Ta'raach and Frank-N-Dank. Originally to release an all-Dilla produced LP entitled "The Verdict", it was shelved for reasons that were not entirely clear.