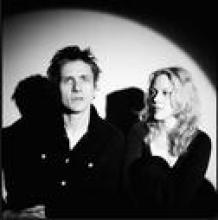 Dean & Britta is a musical duo consisting of Dean Wareham and Britta Phillips, both former members of Luna. Wareham had formed Luna in 1992 after leaving his first band, Galaxie 500. Phillips joined Luna in 2000, replacing bassist Justin Harwood. Their first album started out as a Wareham solo project, but when he heard Phillips' demos, he asked her to join him. After Luna broke up in 2005, Dean & Britta spent the next year working on film scores (most notably Noah Baumbach's movie, The Squid and the Whale), and promoting the documentary film of Luna's farewell tour Tell Me Do You Miss Me.