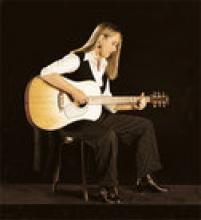 One of the best fingerstyle blues guitarists on the planet. From Melbourne in Australia, but now resident in Portland Oregon, Fiona stands securely at a relatively young age among the new breed of blues players. She was the first woman and first Australian to win the solo/duo section of the Memphis International Blues Challenge. Her electric blues big band album Lucky 13 was a finalist in the International Blues Challenge in 2007. Her big voice, her strong support of blues traditions and her distinctive style of playing make her one of the emerging greats of the blues.