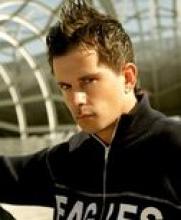 Peter Wilson is a singer/songwriter based in Melbourne, Australia. He first came to notice in early 1994 with the song "I Wanna Dance", a staple in the early days of Hitz-FM, where it regularly reached the no. 1 spot in the nightly countdown of songs voted by listeners. Several singles followed: "Move" later in 1994 (the video clip was played several times on Video Hits), and a danced-up cover of the Benny Mardones classic "Into The Night" in 1995.